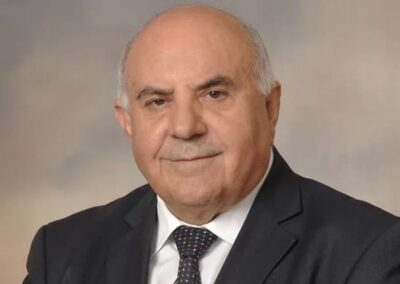 Dr. Kyriakos Veresies was born in Lysi, Famagusta District in 1951. He studied Medicine in Sofia and specialized in Neurology and Psychiatry. He holds a Doctor of Medical Sciences degree and a Master’s degree in Public Service Management. He also holds a Diploma in Systemic Psychotherapy from Tavistock Clinic, London.

From 1985 until the end of October 2006 he worked as the Chief Psychiatrist in the Psychiatric Services of the Ministry of Health, Larnaca-Famagusta. In Nicosia, he is the person who implemented the first treatment programs for alcoholics and addicts in Cyprus and laid the foundations for the establishment of KENTHEA and THEMEA. In 1989 he conducted the first survey in secondary schools in Cyprus and pointed out the existence of drug problems. Under his supervision, the STOP Detoxification Programme in Larnaca operated within the outpatient clinics. Dr Veresie was the founder and Scientific Coordinator of the State Therapeutic Home PIXIDA of the Ministry of Health in Deftera.

Professor Veresies a member of the First National Committee for the Prevention of the Dissemination and Use of Drugs 1998-2003, and for eight years a member of the Cyprus Anti-Drug Council. Since 1995 he has been a specialized Consultant of the Pompidou Group of the Council of Europe, as well as the Representative of Cyprus in the European Union as the National Coordinator of Cyprus at the European Drug Observatory in Lisbon, of which he was also a member of the Secretariat.

Professor K. Veresie’s contribution as a volunteer is also significant. In 1989, together with Christos Mavrelis and Lia Loizidou, founded in Limassol the first Association against Drugs, “Anti-Drug Action”. In 1990 he pioneered the establishment of the Association “Mental Health for All” in Larnaca. In 1992, together with the Metropolitan of Kition, Chrysostomos, they founded the Open Therapeutic Community of Addicts “I TOLMI” and since 1994 the Information Centre for Drugs and Treatment of Addicts (KENTHEA), which to date is the Scientific Director. In KENTHEA he established ten Consulting Stations from Avgorou to Paphos. Together with the then Abbot Machairas Athanasios, founded the “Agia Skepi” Therapeutic Community.

From 1995 until today he has been responsible for conducting the Pan-European School Survey on Alcohol and Drugs known as ESPAD, which is conducted every four years in 35 European countries.

In Larnaca in 2008 he founded the MESOGIOS Foundation – Prevention and Health, which offers services in the prevention and treatment of addictions.

Dr Veresies is a founder, member and Scientific Advisor to several voluntary organizations and associations.