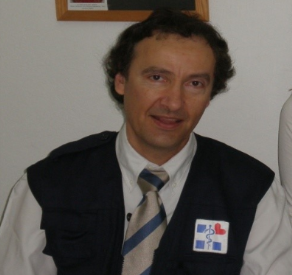 Dr George Karageorge is an assistant professor at the Nursing School of Philips University. He has an eighteen-year teaching experience at the University of West Attica in the schools of nursing, obstetrics, public and social health, foundation of professional training, and core medical studies.

He has also taught in graduate programs in “Crisis Management in the health sector” at the Nursing School of Athens University, as well as at Private institutions of Professional training. He also served as a member of the admissions committee of TEFAA.

Dr George Karageorge is a clinical endocrinologist with additional specialization in public health, general medicine and has a long service as Signor Coordinator/Director of the Hellenic National Health System.

He served for fifteen years as coordinator at the National Health Operation Centre of the Greek Ministry of Health and participated in the management of numerous health crises at the national and international level.

He has represented the Greek government at Wold Health Organization (WHO) and the Health Security Committee (HSC) for the planning of international health regulation (IHR) and vaccination policies at Geneva, Switzerland, and Luxemburg.

He has participated in numerous preparedness drills, including at NATO camps in Germany, and has operational experience in crisis management and emergency cases (Olympic Games, Special Olympics, Cephalonia earthquakes, Aegean islands, Mexico during the H1N1 pandemic, Ukraine for vaccination programs, and he was recommended to join the Sierra Leone mission during the Ebola epidemic crisis.)

He is a member of the Administrative Council of Greek Society of Crisis Management and Emergency Events.

He is a member of Endocrinology, Diabetic, and Obesity Society. He has served for a number of years as president and member of First and Second degree health committee of the Greek government.

Finally, he presided numerous times and served as keynote speaker and coordinator in round table discussions in conferences and training sessions at national and international level. (Greece, Europe, Asia).