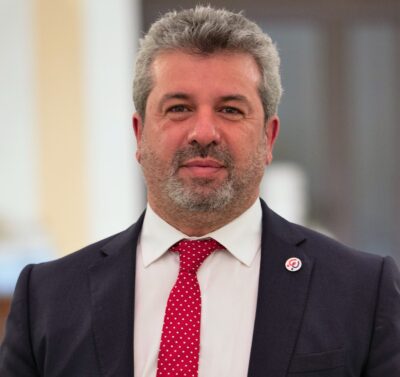 Lambros Bizas is a Registered Nurse and Psychologist. He graduated from the Department of Nursing B’ of the Technological Educational Institute of Athens in 1994 and holds the Pathological Nursing Specialty since 2003.  In 2008 he graduated from the Department of Psychology of Panteion University of Political and Social Sciences and obtained a license to practice as a Psychologist. He holds a Master’s Degree of Level II of the Universita Telematica Internazionale Uninettuno in Health Management since 2011. He is a PhD candidate at the   Universite Catholique De Louvain on political communication and lobbying.

He has been working since 1996 at the Onassis Cardiac Surgery Center (Cardiology Unit of Intensive Care) and from 1998 at the Evangelismos General Hospital (Coronary Care Unit). He provided tutoring to the postgraduate program (Master of Science in Health Management) at the Universita Telematica Internazionale Uninettuno. He was the Director of the Bachelor in Nursing – Adult Program of IST (Independent Studies of Science & Technology) in collaboration with Anglia Ruskin University during the academic year 2016 – 2017

He is an elected member of the Hellenic Regulatory Body of Nurses – HRBoN since 2007 holding various positions while today he is the Treasurer of the Board of Directors.  From November 2009 until today, Treasurer of the Board of Directors of the European Council of Nursing Regulators – FEPI which is now called the European Nursing Council – ENC.  He represents the Hellenic Regulatory Body of Nurses – HRBoN abroad and has participated in numerous committees and working groups of the Hellenic Ministry of Health, the Ministry Education and other Stakeholders, on issues such as e-Health, the creation of a nursing staff’s duties and job description, the integration of the nursing sector into the “heavy” and unhealthy professions, the undergraduate and postgraduate training and education of nurses, the recognition of the professional qualifications of nurses in the EU, etc.

Lambros is a Member of the Editorial Board and columnist of the magazine “Modern Nurse” (since 2006) and the newspaper “Rhythm of Health” (since 2008), while he is also the Editor of the scientific journal: Hellenic Journal of Nursing Science HJNS.

In 2005 he was awarded the title of Fellow Ad Eundem of the Faculty of Nursing & Midwifery of the Royal College of Surgeons in Ireland – RCSI. From February 2020 he is a Member of the Board of Directors and Researcher of the European Centre of Excellence for Research in Continuing Professional Development founded by RCSI.